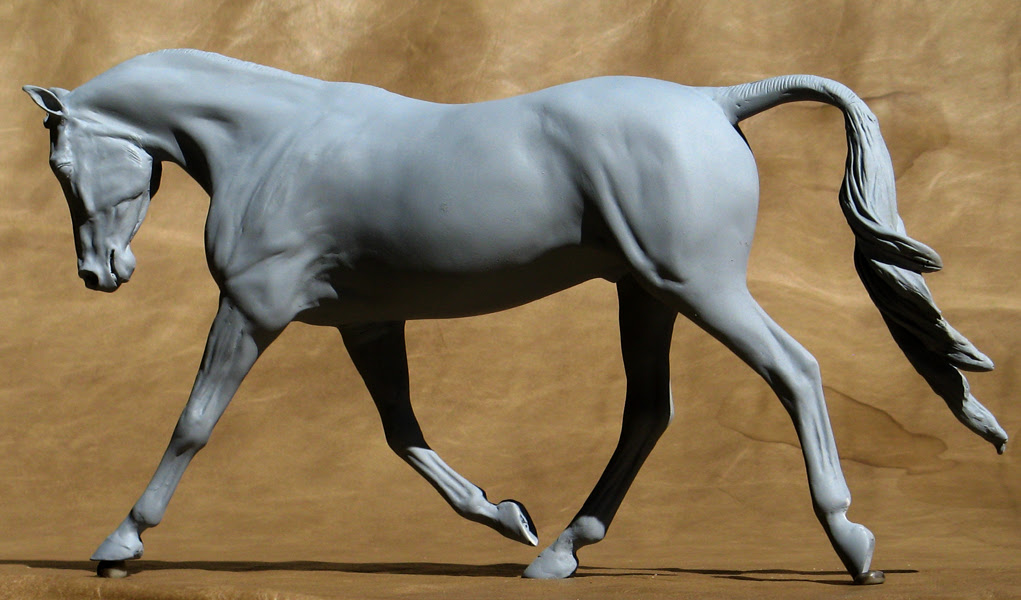 I have been putting in a lot of time on Cooper recently. I just compared him as he is now to the very first pictures--it's amazing how much has changed! 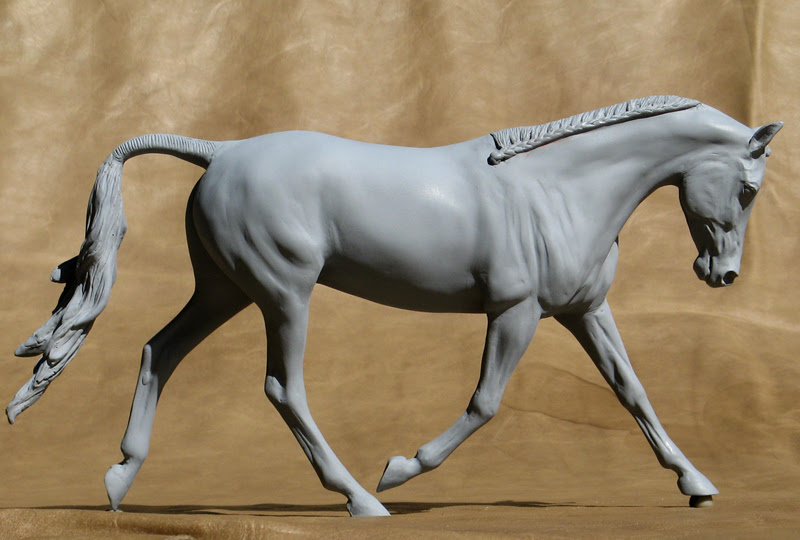 This week I worked intensively on his legs. I can still see a few things that need tweaking (his left hind is still a bit off in positioning--I think it's just a heat-and-bend fix), and there's still smoothing and filling to be done in a few places. Then it will be time for fine detailing, like veining. This stage always seems to take me the longest. It might be because it never seems to result in immediate progress--filling one area only seems to show up three more that need work! I tend to get a bit discouraged around this stage, because it just feels like it takes forever. I always wish I had done more smoothing earlier on, when he was in soft clay, but of course when I'm working in clay I forget how difficult this part is and am in a hurry to see the horse in resin.

I was surprised by how much work needed to be done to his legs. I essentially resculpted each of them from scratch, maintaining the same lengths and such but re-detailing them.

I'm afraid these pictures are rather terrible, being taken in harsh sunlight since they're just quick in-progress shots. I've also noticed that his right hind leg (the supporting one) wants to flex ever so slightly with the full weight of the resin on it. The resin is sold cast and quite heavy, and that leg doesn't have wire running it's full length (I tried to put wire in, but as I think I've mentioned before my resin casting skills are not yet top-notch, seeing as I cast perhaps two castings a year! This won't be a problem in the finished resins, as they will be professionally hollow-cast with properly reinforced legs.

He currently has those two tiny bases--I plan to have similar bases cast in clear resin--very unobtrusive. I am also hoping to manage a "normal" base with a peg that goes into that right hind leg, so that he can be on either the small clear bases or the larger base.
Posted by Maggie Bennett at 5:21 PM 1 comment:

I am currently experiencing severe computer problems, so this update is not going to be an exciting one with lots of pictures and such! I am working on Cooper, and he was laying down on my desk. Also on my desk was a cup full of paint-water that I had been washing brushes in. Well, I turned my chair, which caught on Cooper's leg, causing him to spin around and knock the cup off the desk...right into my laptop. Which promptly went off. I'm going to let it dry out for a while but I don't have much home of it being redeemable, unfortunately. I can only hope that I can get most of my data off of it. Thankfully I had done a major backup shortly before BreyerFest, so I won't lose too much stuff--but I would be very sad to lose all my photos from BreyerFest! I also have my sales information on there, but it is backed up elsewhere and if I have to get a new computer I will be able to recover it.

Cooper had more to be done on him than I thought! I am currently resculpting all his legs to make them really clean and detailed. That's the most major thing I'm working on--that and filling the thousands of pinholes that my rather poor resin casting produced!
Posted by Maggie Bennett at 5:36 PM No comments: