Well, I'm moving. Gotta be out of this apartment by August 6 at noon, but my roommate is moving out tomorrow so there's no point in me staying here much past that. My parents are only a little over half an hour away so it's not far, but I have a ton of stuff and a bunch of aquariums.

I spent the last two days setting up a 55 gallon aquarium, which I'm excited about. It's not my favorite size tank (too deep and narrow for plants, really), but it's what I've got. I built a light stand, which holds two shoplights for a total of 4 fluorescent bulbs running the length of the tank. It should be enough for plants with moderate light requirements--it doesn't look as bright as my smaller tanks, so I'm trying to include more low-light plants. Right now it has a bunch of Java fern, some Java moss, a sword, some H.C. (I hope it spreads!), an anubias (I've been wanting one forever and finally found one I could afford), and some interesting rotala which looks nothing like the rotala in my other tanks. Current livestock is one male red cherry shrimp (he hitchhiked on the wood and plants from another of my tanks). I plan to stock it with threadfin rainbowfish (I. werneri; I already have a dozen but I'll probably pick up some more eventually), shrimp, and some hybrid Endler's livebearers I got this week (they're absolutely stunning, sold as Tiger Endlers but I think of them as Flame Endlers; they're fancy guppy/Endler hybrids so I need to be sure to keep them separated from my pure strain of Endlers).

This all means there has been no model horse work and probably won't be for another week or so.
Posted by Maggie Bennett at 6:29 PM No comments: 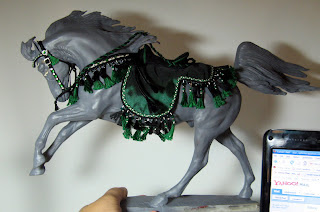 Ok, I couldn't resist. Found the camera (couldn't leave it lost!) and took a few pictures. The costume is by Heather Downing and it's not in any way her fault that I have probably put it on wrong. The bridle is a bit too big for Abel (it fits Zim) and I think it's adjustable but I'm a bit afraid to mess with it, so it's not really on him properly. And since I cut out his eye to straighten it at Breyerfest and haven't had a chance to resculpt around it, there's a nice join between his eye and his face. Ah well.

mare. Still quite rough as I started her on Thursday night at the Artisans' Gallery, although I cheated and used Abel as a base (since I had the clay sculpture left after casting him), so work on her has gone quite quickly to this point. Still plenty left to do but I'm happy with how she's coming so far. I think she's going to get an entirely different tail but I'm not sure yet. This is an awful picture, complete with distortion since her head is turned slightly away from the camera.

Well, everyone else seems to be doing it so I guess I'll join in on the blogging too. I'm Maggie Bennett and I sculpt horses--mostly of the model variety, but I've done some others too.

I just got back from Breyerfest Monday morning and haven't managed to do anything resembling work yet. Khayne (galloping Morab mare) made it back safely with me, which I was a bit worried about. She seems to be developing some cracks in her barrel which are probably from where I cut her apart (back when she was Abel) to add some length--that's been a weak point ever since.

I started moving stuff into my "new" place (read: my parents' basement; yeah, I feel like a bit of a loser but it's what really makes sense right now and I think it's going to be a quite nice place once we get everything set up). Moved most of my resins back in and some clothing; several more trips to go. So work is probably going to be pretty much at a standstill until I'm all moved.

I dressed Abel up in his costume last night and I think he looks so incredibly cool in it. I'd take a picture but what with the whole moving thing I have no idea where my camera currently is. I am a long way away from being organized at all.

More posts to follow as events warrant!
Posted by Maggie Bennett at 11:01 PM No comments: